How Popeyes Turned Spicy Chicken Into a $1.8 Billion Payday 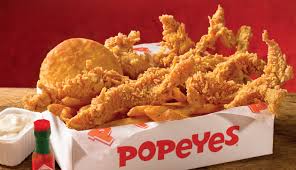 Both TV personality Anthony Bourdain and restaurateur Danny Meyer admit to having a penchant for the spicy fried chicken (and macaroni and cheese) served at Popeyes Louisiana Kitchen, the fast-food chicken juggernaut that logged $268.9 million in revenue in 2016. When the Atlanta-based chain was bought out earlier this week by the company that owns Burger King and Tim Hortons, fans could barely contain themselves, fearing changes to the brand’s recipes or vibe, created by a famously flamboyant founder once referred to as a “homegrown Liberace” by his hometown paper.

Here, now, a brief history of Popeyes, aka how one oddly named fried chicken restaurant soon made its greasy spread across the country:

Popeyes was founded in New Orleans in 1972 by Alvin (Al) C. Copeland Sr., a serial entrepreneur who got his start in the doughnut business. As food historian Andrew F. Smith writes in Fast Food and Junk Food: An Encyclopedia of What We Love to Eat, “Copeland decided to shift from doughnuts to fast-food chicken when KFC started opening outlets in New Orleans.” By the mid-1970s, Copeland began selling franchises; the first one opened in Baton Rouge in 1976.

According to Popeyes’ documented origin story, Copeland originally named his chicken venture “Chicken on the Run,” but after its initial recipe was deemed to bland for locals’ tastes, he closed up shop, added some heat to his spice mixture, and reopened under a sign that read “Popeyes Mighty Good Fried Chicken.” Its slogan? “So fast you get your chicken before you get your change.” When asked why he didn’t use an apostrophe in the name, Copeland was oft-quoted joking that he was “too poor” to afford one at the time.

Copeland named his chicken restaurant not after the spinach-eating comic strip character, but after Popeye Doyle, Gene Hackman’s character in the 1971 film The French Connection. In 1977, the chicken chain confused things slightly by entering into an agreement to use the comic Popeye and his friends in its ads — a campaign that would last 35 years. The annual $1.1 million contract was terminated in 2012. But it was in the early ‘80s that Popeyes pushed the slogan that would linger in consumers’ memories for decades, even beyond the antics of Popeye the Sailor: “Love that Chicken.”

The company introduced its buttermilk biscuits, now considered a signature menu item, in 1983. (Competitor Kentucky Fried Chicken swapped out its rolls for biscuits around the same time.) Smith notes that when the company hired a firm to conduct a blind taste test between KFC and Popeyes, consumers overwhelmingly preferred the spicy kick of Popeyes, “which encouraged Copeland to employ the slogan: America’s Fried Chicken Champ—The Spicy Taste That Can’t Be Beat.”

Popeyes has encountered setbacks. In 1991, the company filed for bankruptcy after not being able to pay down nearly $400 million in debt. A year later, thanks to a nimble bit of legal and financial trickery, the company bounced back when it formed America’s Favorite Chicken Company, Inc. (AFC) and made Popeyes and Church’s Chicken, a new acquisition, subsidiaries. Around this time the company moved its headquarters to Atlanta, Georgia. AFC went public in 2001; in 2004, it sold off Church’s.

Meanwhile, after he went bankrupt and lost control of his company, Copeland formed Al Copeland Investments, a group that still operates (sit-down, full-service) restaurants in New Orleans today. But Copeland retained recipe rights, and thus an ongoing cash flow, from his brainchild. He licensed the use of his Popeyes recipes to AFC between 1992 and 2014 for $3.1 million annually. In 2014, AFC bought that ratio of herbs and spices outright for $43 million.

Copeland died, at the age of 64, in 2008. It wasn’t until his obituary was published that Popeyes fans who lived outside of New Orleans learned about the eccentric and high-rolling founder of their favorite chicken chain. According to the Times-Picayune, Copeland was born into poverty, but once Popeyes started minting money, he spent his fortune freely and publicly. Copeland kept speedboats “in a glass-walled showroom… when he wasn’t racing them, a Lamborghini sports car parked outside his corporate headquarters.”

Copeland’s annual Christmas displays “required sheriff’s deputies to direct the traffic” in front of his home in New Orleans suburb. One of his four weddings (they all ended in divorce) included “a model of Cinderella’s pumpkin coach.” A Louisiana man through and through, he not only sponsored parade floats during Carnival, he rode on them, too. The New York Times wrote in its obit “Copeland planned for his death by building a family tomb for 14 caskets, with four fluted columns and a bronze double door.” He was larger than life — until the end.

After Copeland’s death, the company renamed itself Popeyes Louisiana Chicken, eschewing its previous names “Popeyes Famous Fried Chicken” and “Popeyes Chicken & Biscuits.” Since 2001, Popeyes has been “the number-two quick service chain based on number of units.”

The spicy chicken chain has no shortage of famous fans aside from Bourdain and Meyer: Universal heroine Beyoncé is known for being a Popeyes stan, as she told Oprah in 2003, so much so that the company gave her a lifetime membership card. Funny lady Ellen DeGeneres appeared in a Popeyes commercial in the ‘80s, and famous person Khloe Kardashian has brought its fried chicken and biscuits onto her private jet. When former San Francisco 49ers wide receiver Jerry Rice starred in a Popeyes commercial earlier this year, he faced a considerable amount of backlash for the tired stereotype he portrayed, but maintains his devotion to the brand.